If you live in Illinois or South Carolina, you may not know that other states are changing the color of emergency exit signs from red to green. Federal regulations require exit routes to be adequately lighted with exits marked by a sign reading, “Exit.” If an exit is not in direct line of sight, additional signs must be posted indicating the direction to the nearest exit. The letters must be at least six inches high with a .75 inch stroke width (OSHA 29 CFR 1910.37). As long as the color of the sign is distinct, OSHA leaves color restrictions up to the governing State and municipalities. In the majority of US cities, you’ll see red or green, but Helena, Montana allows orange exit signs as well. When constructing or remodeling, check with your local fire marshal to ensure you’re following the correct color guidelines for your municipality. 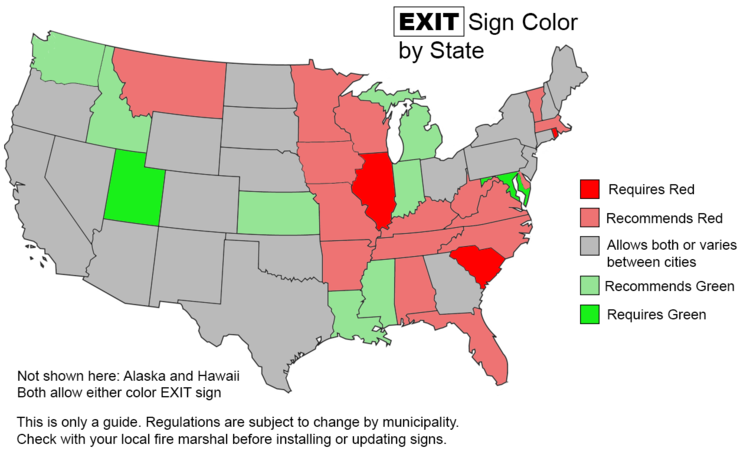 When building or upgrading, letter color isn’t the only thing to consider. Signs can be internally or externally lit, but trust us, you want internally lit units. Some states, including New York, have stricter regulations for externally lit signs (New York State Code [C26-606.2] 27-384).

LED exit signs are energy efficient and can last up to 25 years. Compared to typical incandescent units that use up to 40 watts, LED exit signs typically use between 1.5 watts for single face signs and 5 watts for edge lit double face units. Direct view LED exit signs have the longest visibility (100-300 ft.), great for long corridors or large exhibition halls. 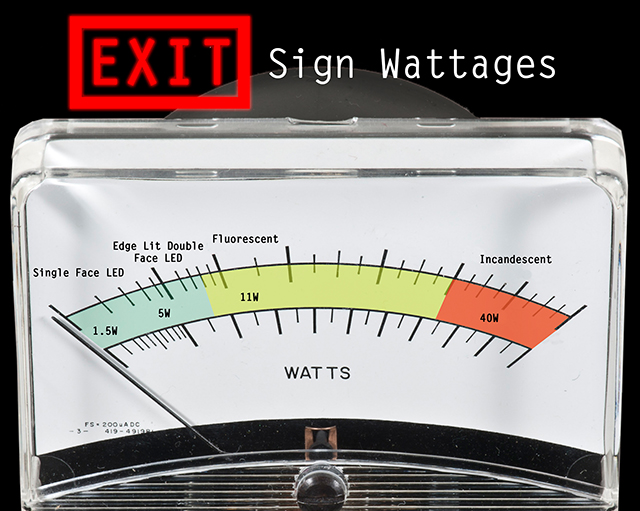 Photoluminescent exit signs don’t require electricity when placed in a well-lit area. These signs are approved for distances ranging from 50 to 100 ft. and include vandal-resistant designs for mounting in public spaces. Photoluminescent signs have an estimated lifespan of 20+ years and do not require monthly testing because there are no bulbs or batteries to replace. These exit signs are environmentally friendly, giving off 0 emissions.

Not all environments are compatible with photoluminescent signs, so make sure the following NFPA guidelines can be followed before purchasing. In some cases, a dedicated light source may be required to charge the sign.

The biggest hurdle to adoption seems to be the occupancy requirement because the charging light needs to remain on while the janitorial staff cleans after hours or an employee works outside of standard operating hours. Depending on the light sources used to charge the signs and the number of photolumenescent signs in the building, it can require more electricity to keep the signs charging than it would to power LED exit signs instead.

When selecting an exit sign, you should also take the humidity of the environment into consideration. Emergency exit signs UL listed for “damp locations” have been approved for installation in areas where the light will be exposed to occasional condensation or moisture. This is important for gyms, medical facilities, and office buildings with an indoor pool.

Standalone battery-operated emergency lights must be tested yearly for a minimum of 90 minutes. Hard wired emergency lights must be tested monthly for a minimum of 30 seconds. This includes exit signs with a battery backup. A lower maintenance alternative is a self-testing exit sign which performs routine checks every 30 days for the required 30 seconds so only a visual inspection of the status indicator is required on a monthly basis (NFPA 101(00), Sec. 7.10.9.2). Because photoluminescent exit signs don’t require any electricity when placed in a well-lit area, they are almost maintenance free. Units and the charging light only need to be dusted regularly to ensure that enough light is reaching the unit for it to charge.

In the U.S., the exit sign hasn’t changed much in almost 100 years. Federal regulations still require “EXIT” be legible on all emergency exit signage. However, if you’ve traveled internationally, you may have seen exits marked by a green pictograph of a stick figure running through a doorway. Designed by Yukio Ota in the late 1970s, this symbol was adopted by the International Organization for Standardization (ISO) in 1985. New York City adopted “the running man” in 2006. An update to the fire code now mandates high-rises (buildings 75 ft. or higher) include the pictogram on all fire doors in addition to the red exit signs directing people to the nearest stairwell.

In 2011, the GETAWAY Project kicked off in Spain with the goal to design and test an intelligent emergency sign system to direct train and subway passengers to the nearest viable exit. In 2013 and 2014, evacuation trials took place in Barcelona, testing the dynamic exit signs against static signs. Instead of directing passengers to the nearest exit, the Intelligent Active Dynamic Signage System (DSS) is designed to check the environment for non-viable exits and redirect travelers to the closest viable alternative. Exit signs pointing to a viable exit turn green while exits pointing to non-viable exits change to a red X. Decision time of test subjects improved 44% when the dynamic signs were used. 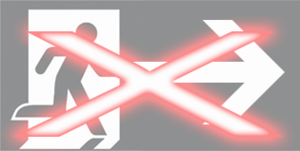 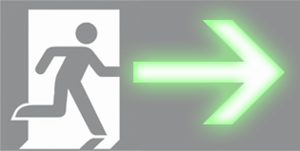 The latest update in August 2015 suggests researchers are still trying to make the system viable. Required code changes and the risks associated with changing the familiar markings means this technology is probably still many years off. It will be interesting to see if this system will ever come to market.

Don’t buy the wrong color exit sign. When you’re ready to install exit and emergency lighting or upgrade to more durable and efficient products, give our lighting experts a call at 1-800-624-4488. We will help you find the right exit sign for your building.