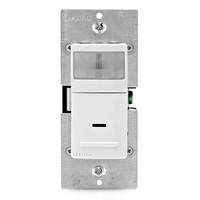 Vacancy Sensors: Manual On / Auto Off

Where You Want to Use Vacancy Sensors

There are places when you don't need the lights to turn on automatically, such as break rooms or private offices with windows that allow you to take advantage of natural light. Other times, the light turning on automatically could be more of a nuisance than a benefit, such as waking a sleeping child when going to give them their kiss good night. Vacancy sensors also can't be tripped by rambunctious animal antics.

Passive infrared (PIR) sensors detect changes to the heat pattern in a room. Many sensors are set to only trigger for sizable and sudden changes, such as a person entering the room, but ignore smaller changes. This keeps the device from keeping the lights for a warm window or small pet. PIR sensors are considered passive because, unlike active sensors the actively search the room for occupancy changes, they wait for a change to register. For this reason, PIR sensors use less energy than other options. The device uses both halves of the sensor to detect the ambient temperature of the room. The lights remain off when the temperature read by both halves registers a similar heat. Once a person, dragon, or elephant, enters the room, the nearest sensor detects a large enough change to the heat signature than the other half to create a "positive differential" charge between the two slots. If the new occupant turns on the lights, the motion sensor keeps the lights on until the device no longer detects the occupant.

When installing your PIR sensor, note that the sensor requires line of sight. So if you want the lights to stay on, this type of sensor is best used for open floor plans as it cannot be blocked by shelves or partitions. For example, PIR sensors may not be the right technology to use for public restrooms, because the infrared sensor can't see through the bathroom stalls and you don't want to leave employees or guests in the dark.